This is one of the easiest MLM plans to understand. In this Unilevel MLM plan, the distributor is free to recruit as many members as he wants to and all of them will be recruited in his front line. the same compensation ( commission) and the commissions are paid up to a fixed level to all the members at the same level, depending on the company policy. Members receive the commissions up to 5 to 7 levels deep.

The marketer who works in a Unilevel MLM network will get the following commissions.

For recruiting new members into the network, a distributor will earn a bonus known as a Sponsor Bonus or referral bonus.

Try out the Unilevel MLM Calculator and work out your compensation.

One of the most widely used MLM plans in the world, Binary MLM plan consists of two legs, namely the left leg (Power Leg) and right leg (Profit leg). Depending on the availability of the position each new member can be either on the left or the right leg

Each member in the binary network is responsible for recruiting two other members in their downline and placing them in the two legs in his downline. If he recruits more than two members, then they will be placed in the next available position in the left leg (power leg). This would lead to all the members in the upline to share the profits of the sale generated by that member, irrespective of who recruited them. We named this concept as spillover

A distributor in a Binary Network will get the following commissions.

For recruiting new members into the network, a distributor will earn a bonus known as a Sponsor Bonus or referral bonus.

When a new member is introduced into the network, say a binary network, and it will lead to balancing of the legs in terms of either the sales volume and the member of volume, then that particular distributor will earn a matching bonus.

Calculate the compensations you would earn from a Binary MLM Plan with our Binary MLM calculator. 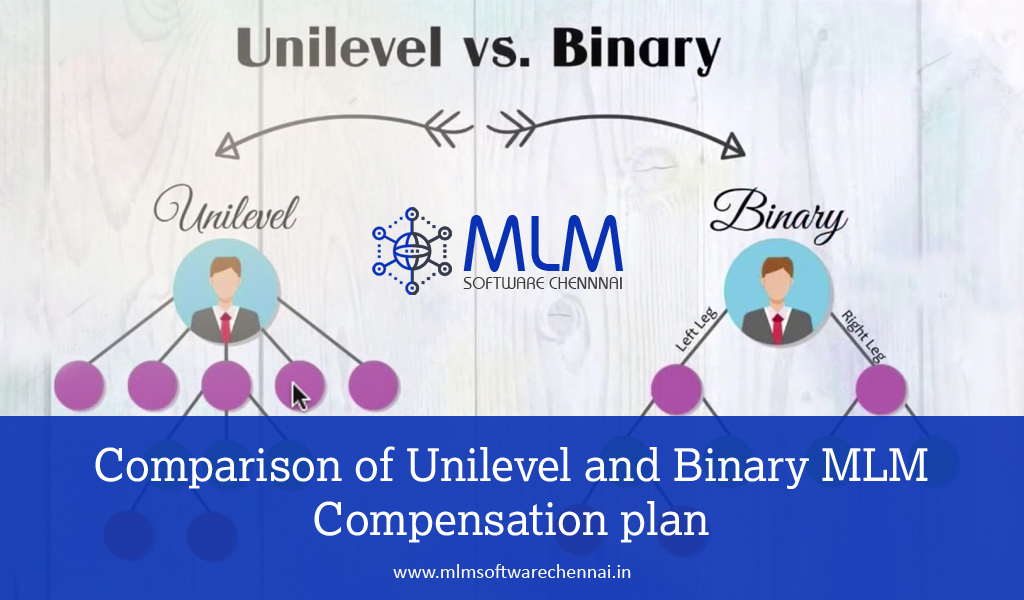  Implementation: Unilevel MLM plan is quite straightforward and easy to implement. The mandatory matching of the member volume in the legs leads to the complexity in the implementation of Binary MLM Plan.

 Downline expansion: The concept of spillover leads to the rapid expansion of the downline in Binary MLM Plan while this is not possible in Unilevel MLM plan.

 Downline matching: Unilevel MLM Plan has no such concept of matching downlines while in case of Binary MLM plan, it is necessary to match the number of members in the left and right leg.

 Downline recruitment: In case of binary MLM Plan, there is a chance that individual extent of a distributor can influence the addition of new members in further down the downline to some extent due to the spillover concept. This is not the case in case of Unilevel MLM plan, where only a strong leadership skill can only influence the downline members to recruit more members.

 Teamwork: Binary MLM Plan thrives on the teamwork of the entire network while this does not influence the Unilevel MLM Plan.

Binary MLM plan, as well as the Unilevel MLM Plan, comes with its own set of advantages and disadvantages. It is up to the MLM company to decide on which one to opt for, considering their products, business policies, and targets. It’s good to try MLM Software Demo by choosing both the plans and then one will be able to understand the compensation plans.